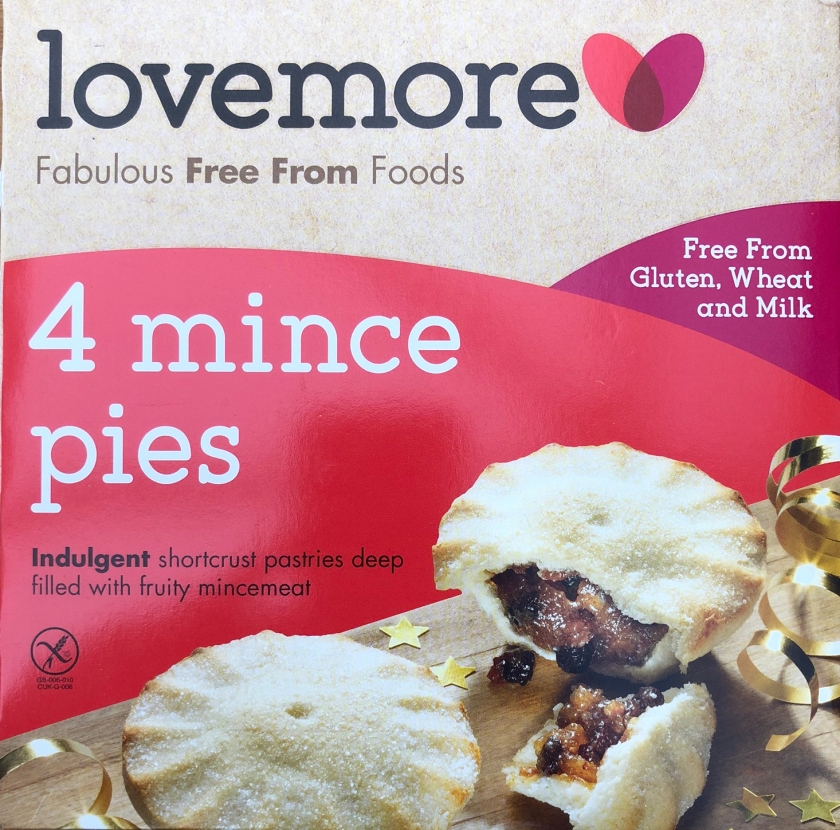 You heard that right, Freefrom…like a miracle they’ve somehow been able to create mince pies here without gluten, milk or wheat. Crazy talk!

Welcome to the first actual mince pie review of 2019. It’s time to get busy for the build up to Christmas once more.

Like most people I expect, I’ve never heard of this brand, but there it was sitting on Ocado, without any fanfare at all,  after they finally added all of their Christmas foods (after every other major supermarket grrr).

The packaging is clear enough, but hang on, are they really using the courier font on the title ‘4 mince pies’. Was it drawn up by an intern or something? Courier? Really? I mean, it’s not as bad as Times New Roman, but Courier is simply not a font for packaging. And if some font nerd tells me it’s not Courier, they can shut up, it’s close enough.

It’s just a square box at the end of the day. The picture on the front looks quite nice, but there is no window to the pies here, so you do have to hope for the best a bit for them being all in one piece. It’s not massively Christmassy either really, all a bit dull.

Can’t get over that font though.

4/10 – It’s not horrendous, but supremely boring. Did I mention the font?

When you spend 9 months not writing these reviews, then you start again, it’s really frustrating to try and keep to a consistent structure. If I had it my way, I’d start all over again and copy The Mince Pie Club who write a couple of lines and give it a rating. I’m kidding, I wouldn’t, but sometimes I just don’t really know what to write.

These are bagged in the box, it keeps them fresh, but the box is well sealed, so perhaps a bit of plastic to be saved here.

Some interesting damp patches on top of the pies, maybe that’s an ingredients thing in the whole free from idea. And maybe that’s why a window in the packaging wouldn’t work so well?

Let’s take them out of the bag…

I mean, the plastic tray looks fine, but something looks strange about these pies.

Yep there it is…look how thick that pastry is. Oh…to confirm, it really is THAT thick all the way through.

Still, they are evenly baked, not much of a pretty design though and while the sugar gives them a little something, it’s not enough for me.

As usual, I forgot to photo the filling. But, they are quite filling (ho ho). 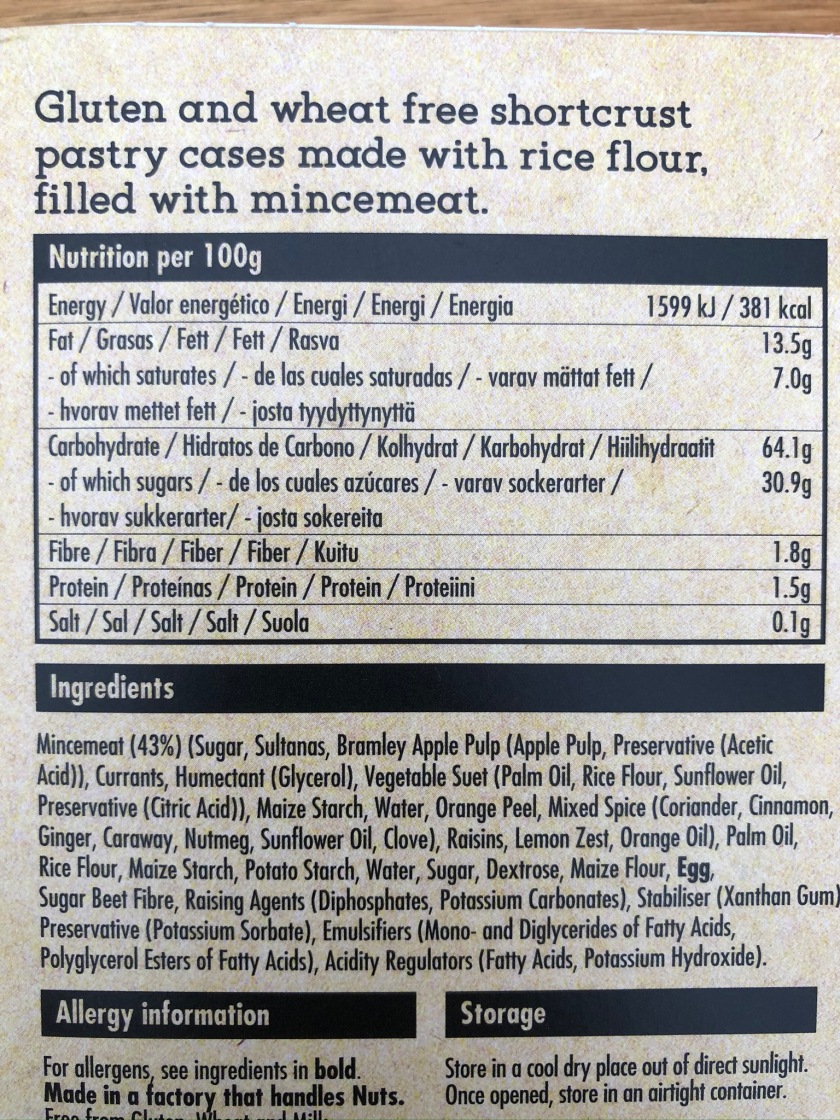 There is a nice aroma to these pies and the assumption is that the filling will be quite boozy. I can’t see booze on the ingredients list though (sadly).

Contrary to how the tops look, the filling isn’t super wet. It’s quite solid and chunky, with a reasonable boozy warmth.

7/10 – Suprisingly chunky and impressively not rubbish

Now, this is the main bit of this. We’re in a free from wheat and milk and gluten world here, surely this will taste like plastic?

I’m genuinely delighted to tell you, they are actually really tasty. These are a real surprise. The pastry, made from rice flour remember (I don’t know what that means, I’m pretending I do), is nicely crunchy but not dry. It hasn’t got any of that claggy texture you get in some of the cheapo pies (Sainsbury’s mince pies, I’m looking at you). It’s not overly buttery and it’s not too sweet. No soggy bottom neither.

If I had to pick fault, the pastry is possibly a bit thick, especially on the top, but they are genuinely good.

The filling fills about half the case, not bad, seen better, but given the damp patches, I’m guessing this is capacity here. There is a reasonable aroma, there is definitely a slightly boozy hint, but the ingredients do say otherwise. Just on that, I should point out…lots of palm oil at work in here, I’ve no idea if it’s sustainable or what, but really would like to see them come back with palm oil alternatives at some stage.

The filling is tasty anyway, with a nice fruity flavour and plenty of chunks. I didn’t try them, but these feel substantial enough to be blasted in the microwave for a few seconds too.

Excellent start to the 2019 reviews here, boring packaging and they might not look spectacular, but they taste great and, palm oil issues not-withstanding, are worth your time.