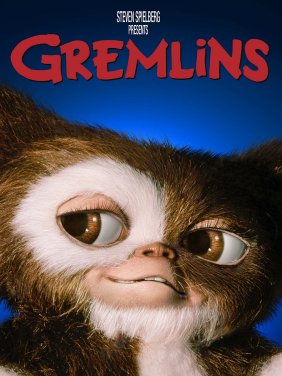 Today’s movie is one of those films, when you think of it it’s the nice, jolly, marginally scary movies with some great laughs.

Then you re-watch and it’s really really not like that at all.

This is a genuine, not-for-kids movie that is actually scary, is actually funny and is really entertaining.

Why not for kids though? Well, there is a particular speech that’s tragically, disturbingly funny and very much not child friendly…it comes from Kate, played by Phoebe Cates late on in the movie and goes like this:

The worst thing that ever happened to me was on Christmas. Oh, God. It was so horrible. It was Christmas Eve. I was 9 years old. Me and Mom were decorating the tree, waiting for Dad to come home from work. A couple of hours went by. Dad wasn’t home. So Mom called the office. No answer. Christmas Day came and went and still nothing. So the police began a search. Four or five days went by. Neither one of us could eat or sleep. Everything was falling apart. It was snowing outside. The house was freezing, so I went to try to light up the fire. And that’s when I noticed the smell. The firemen came and broke through the chimney top. And me and Mom were expecting them to pull out a dead cat or a bird. And instead they pulled out my father. He was dressed in a Santa Claus suit. He’d been climbing down the chimney on Christmas Eve, his arms loaded with presents. He was gonna surprise us. He slipped and broke his neck. He died instantly. And that’s how I found out there was no Santa Claus.

In case you’ve never seen it, the film centres on the Dad buying a present for his son for Christmas. He buys Gizmo, the cute little bear thing on the cover. But there are three, clear rules:

Needless to say, the rules get broken and chaos ensues.

Watching the movie, you do forget a very young Corey Feldman shows up, who is always great value. There are some really memorable scenes such as the stairlift, the microwave, the radio controlled car and loads more throughout.

To sum up, this is a great great movie, a true classic, and you need to watch it every year!