The final review of 2017 now, hopefully everyone has had a lovely Christmas so far, we do still have a few days to go and of course, New Year’s Eve is coming up for a final blow out before the next 4 or 5 days of trying to stick to a diet before the next weekend comes along and you go for a takeaway and a beer.

Anyway…I picked these up shortly before Christmas in the St Pancras store but didn’t get around to eating them until a couple of days ago, so let’s crack on. 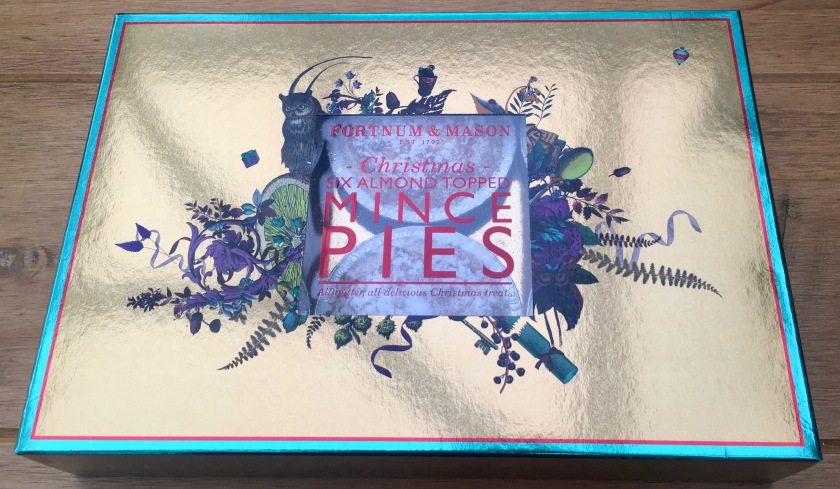 Packaging
Pretty much re-visiting everything I said about the traditional Fortnum and Mason Mince Pies here, the only difference being that the packaging here is gold rather than red. Both colours are gorgeously shiny and reflective, which is a nightmare for photos, but I do actually prefer this colour over the red. The pattern on the front is similar too, but with more purples than green this time.

Presentation
Sliding out the tray, what do we see…

The tray itself is this lovely gold cardboard creation, and it’s very nice. Much nicer than the plastic trays you see everywhere else. It’s deep too…

Interestingly though, the pies themselves are decorated quite differently to the traditional variety. Before, we saw the F&M logo on top with a very light covering of granulated sugar, now we have something a whole lot messier. Is it icing sugar? Almond dust? Don’t know, but it looks quite snowy and therefore Christmassy…so it works for me.

9/10 – Lovely presentation generally, but missing a decoration of some kind.

Filling
So, the filling…

I had high hopes here, especially after the previous F&M pies were so SOOO good.

But, you know what, there is something missing here.

The lid on these pies sits on top despite appearances and is a bit of a dome inside. The pie is about half full of mince. And worse, they taste a little bit bland. The mincemeat is quite wet, has a little kick of brandy if you give it time to appear…but overall, disappointing.

Taste Test
Ok, so the mince itself is bland, but what about the pie overall. After all, we’ve got some premium pastry and premium almond topping here right.

So, my first tasting went badly…the top of the pie is quite crunchy and solid, being embedded with the almonds. The rest of the pie though, especially with the wet filling, is very soft. This resulted in my fat hands squashing the pie and the lid hitting the kitchen floor, creating a dusty mess (and expensive dusty mess at that).

Take two then…and the pastry itself is the good stuff from the traditional mince pies, but this time the filling really is doing it no favours, the wetness is too much and you end up folding it into your mouth, leaving the lid behind on the plate. The almond lid is nice, very crunchy and almondy, and I liked that, but it was just physically tricky to eat it all together.

So, i’m torn for a taste test…in the end, the filling is killing it!

10/20 – Two of the three core elements here are good, but the bad one hurts everything!

They look the part, everyone thinks you are distinctly middle class at dinner parties if you’ve got a plate full of them…but just don’t let anyone eat them…because real middle class people have cleaners and you’ll be picking up the pieces yourself with these.