“It’s coming to something when petrol stations are doing their own mince pies”.

I pointed out to her that Spar is a proper supermarket, but she in turn pointed out to me that when was the last time you saw one that WASN’T a petrol station. And with that, she won the argument and left.

So, here we are then. A slightly diesel flavoured mince pie… 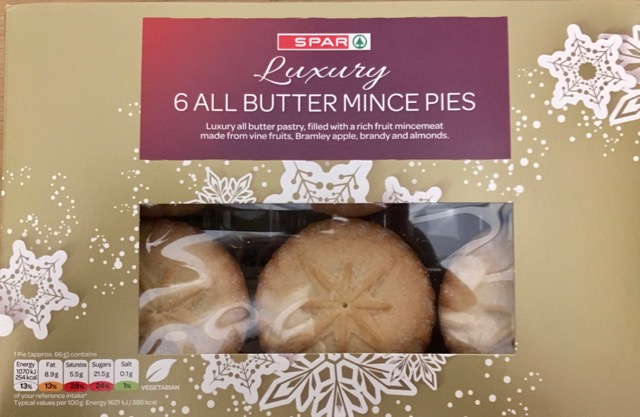 Packaging
Right, let’s take the snobbery out of this (that logo, what is this, 1975???), the packaging is quite Christmassy here. The snowflakes, the colour scheme and we even have a window onto what appear to be quite pretty mince pies.

You know what, for a petrol station, this is pretty good looking stuff.

8/10 – A good effort this, really pretty snowflakes and a window.

Presentation
Sliding the tray out of the box and it’s not bad at all. Check it out:

The snowflake decoration isn’t bad, they all appear consistently baked on the top and they do look a good size too. 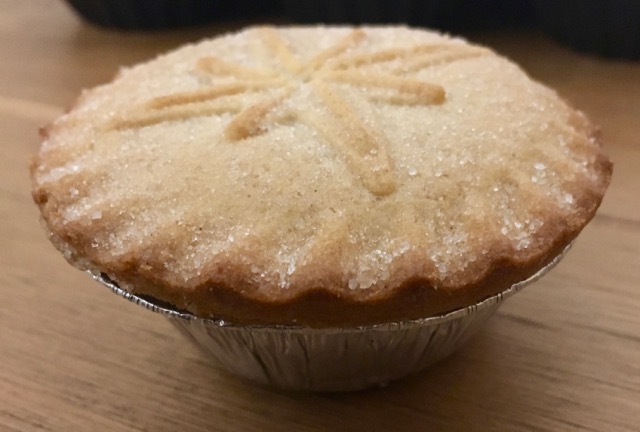 What’s more is the evenness of the bake here. These are surprisingly well put together mince pies. And that is a copious amount, but not Co-op craziness, of sugar on top of the pie too. The pies are a nice golden colour too.

8/10 – Really well presented, attractive design, well baked across the board.

Filling
I’ll confess. I haven’t taken a photo of the insides of these. You’ll have to take my word for the fact that the filling is about three quarters of the depth of the pie, which isn’t bad generally.

The mincemeat filling is fruity looking, plenty of sizeable lumps of fruit and some notable nuts in there.

7/10 – A good helping of filling and doesn’t appear massively processed down, nicely chunky.

Taste Test
This is it then. So far, the Spar mince pies have been hugely impressive and I’ve seen other reviews elsewhere that are very complimentary too. Tucking in then…

And the pastry is that kind of buttery pastry that coats the inside of your mouth, removing all moisture. It’s like the worlds biggest digestive biscuit, but in pastry form. So, that’s not good. At all. And although on initially opening the box, the first pies were fine, the next couple the next day had slightly soggy bottoms. This is something I saw with the Aldi ones too, but this was worse thanks to the thin base.

The reason for the tacky mouth syndrome though is clear here, the top of the mince pie is much thicker than normal, it’s literally almost digestive biscuit thickness which is just a notch too much.

Pushing on then, the filling is genuinely tasty. In fact, it’s very very good filling. It’s got a very fruity flavour, and the visible nuts were also easy to taste in the mix. This is a good filling.

Overall Score
Well, it was going well until we hit the pastry. I would still recommend these pies, they are not bad at all. It’s worthwhile after sticking £50 of fuel in the car, grabbing a box of these to take for the family (or eating the lot while driving the next 50 miles home).